Experience the captivating sights and locations of Maryborough, Queensland – a REAL old town – with a cruise on the Mary River! From the deck of ‘The Mary’ you will sail under the Granville Bridge and see exquisite birdlife, historic dockyards, and beautiful heritage homes set in landscaped gardens rolling down to the river. Book NOW!

Leaving City Hall at 10am, the air-conditioned ‘verandah’ bus takes you past historical buildings and homes, historical sites and points of interest.

Sit back and enjoy the history of Maryborough as told by the guide on this fun, relaxed and informative tour.
Book your tour now!

Visit Gatakers Artspace, a community arts and cultural hub catering to a range of creative activities including visual arts, performers, musicians, writers photographic groups and dance. Outside, stroll through a landscaped lane called the Portside Passage where you will view works of art reflecting Maryborough’s rich history.

Maryborough Family Heritage Institute holds one of the largest collections of genealogy records in Queensland, covering the immigrant passengers into Queensland and cemetery and burial records for a number of Queensland areas. 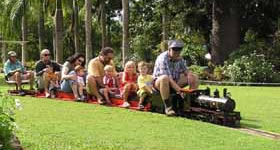 The miniature train tracks and the ‘station shelter’ are the home to MELSA, the model steam train club of Maryborough. The trains run on the last Sunday of the month and are a Maryborough tradition that began in 1976.

Miss Janet Melville bequeathed the Fairy Fountain and Band Rotunda in memory of her brother Andrew who was Mayor of Maryborough in 1863.

View over 5,000 items of military and colonial memorabilia which form displays of exceptional quality. Includes 2 Victoria Crosses, a Cross of Valour, many other significant medals, uniforms and period costumes, historic vehicles, scale models, trench art, paintings, murals and wood sculptures. Open 7 days a week from 9am until 3pm. More info!

‘Mary Delicious’ is a lolly shop, a milk bar and an ice-creamery, specialising in homemade fudges, and serving Peters and the local homemade, Mammino’s ice creams.

Relax in the adjacent leafy courtyard and enjoy their famous Devonshire Teas served with real cream, or perhaps freshly made sandwiches.
Read more …

The original 1870s Mary Ann was an 8 horse-power locally-built locomotive and hauled Kauri Pine logs from the woods to tidewater. The replica Mary Ann was built in Maryborough and operates every Thursday and the last Sunday of the month (0900-1400 hrs) in Queens Park close to the CBD.

Walk through the Bond Store and step on history. The earth floor and handmade bricks in the original downstairs of the 1864 building with many of the liquor barrels left over from that time.

Located on the corner of Kent and Richmond streets a statue of Mary Poppins stands proudly as recognition of Maryborough’s link with the famous nanny. PL Travers was born Helen Lyndon Goff in Maryborough in 1899.

The life-sized bronze statue, erected in 2005, is in the likeness of the illustrations from the novels.

• Bollards – Maryboroughs Bollards are seven colourful bollards overlooking the Mary River. They represent a sea captain welcoming a family of immigrants landing at the Port of Maryborough in the 1860s.
• Cannons – The guns were presented to the city as a gift from the Royal Australian Navy and installed in 1914.
• Walker’s Ship Memorial – This memorial was built to represent the bow of a ship and was dedicated in 1993. It features the names of ships built for The Royal Australian Navy by Walkers Shipyards from 1940 to 1974, during which time 37 ships were launched into the Mary River.

Any cookies that may not be particularly necessary for the website to function and is used specifically to collect user personal data via analytics, ads, other embedded contents are termed as non-necessary cookies. It is mandatory to procure user consent prior to running these cookies on your website.